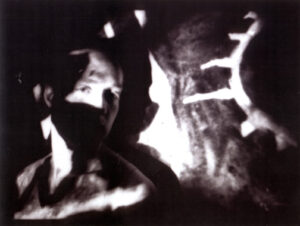 “THREAD is the river, the tree, love and hate. THREAD is the association, the metaphor, the abstract connection between tangible & intangible.” – James Izzo (1977-2011)
“To me, James was an inspired talent and a true gentleman. He had a positive attitude and a focused determined manner.”
““ Jarboe, Sept 4th, 2011
I met Wallace James Michael Izzo in 2000. To me I’ll always associate him with the name THREAD. That’s how I think of him. It was the name he chose for his musical identity. A name he believed in so much he trademarked it with the government. It was also a HUGE hassle because of other bands that would later surface with the name. “Should we send them a cease and desist letter?” I’d get that email from him a lot. Usually an email back to the offender was enough to scare them off, especially when mentioning the trademark.Middle Pillar had heard of THREAD through various music sites. Thread had done a few COIL remixes (‘Dark River’ and ‘Glowworms/Waveforms’ mix) which the band had heard and enjoyed, but Jon Whitney of Brainwashed.com loved them (and James) well enough to release them (with Coil’s blessing). (Please see Brainwashed’s thoughtful post on James’ passing)
——————-
Friend Bill Ackerman reflects upon Thread’s influences:”As a teenager, James Izzo loved anything with synthesizers (Kraftwerk, Depeche Mode, Gary Numan, New Order), and fell hard for industrial/techno (Skinny Puppy, Coil, Aphex Twin, Autechre). By his twenties, he turned to jazz (Miles Davis, Duke Ellington, John Coltrane) and film soundtracks, especially those by Howard Shore and Angelo Badalamenti. Throughout these extremes he always loved iconoclastic singer-songwriters (Leonard Cohen, Nick Cave, Tom Waits, Tori Amos, PJ Harvey, Lou Reed). And always worshiped David Bowie.”

“He did pretty mind-blowing remixes (which, in the classic Aphex Twin manner, were more like Thread originals with elements of the original composition incorporated). As well as COIL these included Meat Beat Manifesto, Pan Sonic, Autechre, Neotropic, Cazzo Dio, Artefact and Jarboe (formally of SWANS).” 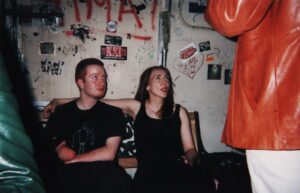 The Jarboe remix led to correspondence and eventual collaboration with the artist. Jarboe sang on what would become Thread’s first album Abnormal Love, singing on the tracks “Contours” and dueting with the composer on the haunting “In Sweet Sorrow.”KD (of Middle Pillar Distribution) had struck up an on-line friendship with Thread consisting of long thoughtful emails from Izzo on music. Eventually they discussed releasing a full-length album with the (then) newly launched Middle Pillar Presents label. In the initial package we received there was a demo and a short informational bio. The music was dark hypnotic programmed electronics, some with beats, some with lyrics, each different and interesting. Something we wanted for the beginnings of the MPP label. In the bio, the first thing mentioned was that James Izzo (Thread) was born without hands. A fact that induces immediate images in the mind – disturbing ones for some. What kind of person produces this beautifully haunting music? We wanted to find out.

Soon after we were set to meet at a local restaurant in NYC for dinner. Right out of the box Thread was a wealth of surprises. This was a man who did not hide his disability or show any limitations. At dinner, Thread astounded me by ordering nachos. Of the items on the menu, this was the last thing you’d think someone without hands would order. It revealed volumes about someone who didn’t compromise or shrink from the world. He would do what he wanted in his unconventional manner as if it were the norm.

This unique and individualistic behavior was reflected in his music. Constant shifting rhythms, unorthodox melodies, strange synth patches ““ erratic parts that melded to form cohesive art in Thread’s creative mind. It all made sense when you met him ““ when you talked to him. 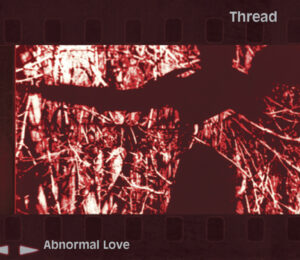 This fruitful meeting led to the pressing of Abnormal Love by Thread in 2000. The album reflected a blending of the organic with machines, noisy soundscapes with moments of melodic bliss and minimal experimental electronica. Even the cover had a metallic ink wash to make it seem “˜other.’ Provocative titles included “The Horror of the Undeserved Gift”, “A Cloud Without Form” and “God’s Morse Code”. And of course, the aforementioned “In Sweet Sorrow” a haunting ethereal track of love and loss. The album, like the artist himself, meant to provoke a reaction. Neither was passive.But despite the emotional turmoil represented in Abnormal Love, the man himself was a fun guy. He just was.

He drove a specially modified van to a Middle Pillar Holiday party and parallel parked it right in front of the venue. He drank rounds and ate pizza with everyone else. I was so used to him that I’d be astonished by the surprise on other people’s faces when they noticed his lack of hands. “Oh yeah, I forgot about that.” Spend a few minutes with Thread and you’d forget too.

To coincide with the holiday party, Middle Pillar released (and gave away to the attendees that evening) A Misfit Xmas ““ a compilation of holiday songs. For his part, Thread produced a version of “The Little Drummer Boy.” (“My favorite Thread track!” KD of Middle Pillar). Again, completely different from anything we heard from Thread. Multi-layered panned drums and percussive samples topped it off with his masterful vocal – so pained and emotive. A chilling track.

After the release of Abnormal Love, performance was the next logical step. Thread had asked me to play guitar with him for an upcoming show at the 2000 New Music Seminar. At his home in New Jersey (where he lived at the time) I visited him to learn the tracks. While there he told me of his interests in martial arts, meditation and showed me an elaborate tea ceremony that he used to relieve stress. I’ve never seen anyone with a more eclectic & unique collection of tea leaves from around the world. He told me about his correspondence and remix work for COIL as well as his friendship with Jarboe of SWANS, telling me anecdotes of when she had visited and recorded with him at his home. These sessions became demos for what would become “The Men Album” ““ Jarboe’s double-cd which features a duet with Thread (credited as James Izzo) called “Penance.” His description of Jarboe in feety pajamas is a hysterical visual that I wish he had photographic evidence of!

I was privileged to have performed with Thread at The Bat Cave in NYC. Kit Messick (of The Mirror Reveals) performed a beautiful duet with Thread of “In Sweet Sorrow.” At this show he wore prosthetic hooks ““ the only time I’d ever see him use them. These weren’t for mobility. They were used as props to shock the audience, to force them to acknowledge what he was and what he had accomplished despite deficiencies. Later he did other performances in New Jersey and Philly with various other players.Thread had become reclusive in the last few years due to declining health, moving down south with his family. In letters that he sent, he explained that his voice was also affected which is why we could not correspond over the phone. While I found that strange the tone of the rest of his letters were optimistic about the follow-up album and future recordings. I left it at that and thought he would reestablish contact on his own terms when he was ready. 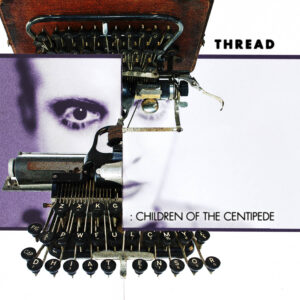 His second and final album, Children of the Centipede, released digitally in 2010, was a wonderful record. Same in spirit, different in application. With Thread you never knew what to expect. Electronic – yes. Ambient ““ yes. But with an expansion of ideas that encompassed all his interests. The creepy title track, the horror of “The Chattering Man,” the quirkiness of “Abstraction Typewriter” (my favorite track). Only Thread could play a typewriter as a musical instrument. And then out of nowhere, a beautiful version of the Gershwin classic “Summertime.”Thread was one of the most interesting persons I’ve ever met, even aside from his music ““ a mischievous daring spirit in life, an artist of the unexpected.

This is exemplified in a funny anecdote from Bill Ackerman: “I remember when we were in a subway station in Manhattan, and some children were staring at (his lack of hands). He went up to them and said, “Kids, when you go to the zoo, DON’T feed the alligators.” The look of terror on their faces mixed with the humor of the situation sums it all up. 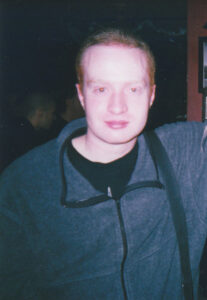